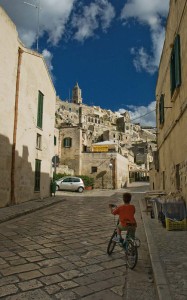 The Convention concerning the Protection of the World Cultural and Natural Heritage, adopted by UNESCO in 1972, encourages the member states to identify, protect and preserve cultural and natural heritage for future generations to appreciate and enjoy. Currently the World Heritage List includes 981 properties which the World Heritage Committee considers as having outstanding value to humanity. These include 759 cultural, 193 natural and 29 mixed properties in 160 States Parties.

Over 250 sites are historic towns or city centers, some include fortifications or ports, and others are unique parts of a town like a historic bazaar. Some examples of such urban areas are the Medieval Town of Toruń (Poland), the Historic Walled Town of Cuenca (Spain), the Old Town of Galle and its Fortifications (Sri Lanka), the Historic Mosque City of Bagerhat (Bangladesh), the White City of Tel-Aviv (Israel), Coro and its Port (Venezuela), Provins - Town of Medieval Fairs (France), and the Medina of Marrakesh (Morocco).

All historic cities are facing difficulties in reconciling conservation and socio-economic development goals, not only those inscribed on the World Heritage List. This has been addressed by an UNESCO working group, and on 10 November 2011 the General Conference adopted the new Recommendation on the Historic Urban Landscape. (UNESCO 2011, 2013)
A holistic approach is suggested which seeks to increase the sustainability of changes in the urban landscape by taking account of the existing built environment, intangible heritage, cultural diversity, socio-economic and environmental factors along with local community values. However the Recommendation is a “soft-law” to be implemented by Member States on a voluntary basis and adapted to their specific contexts.

World Heritage site designation by the World Heritage Committee comes with required comprehensive management plans and regular monitoring. The status of outstanding universal value recognized by the designation must be maintained, which limits or impedes changes in the protected areas. However, the designation has the potential to increase tourist activities at the site, generating income and employment for local communities. However, this needs to be well planned with respect to sustainable tourism principles.

An increase of visits is not guaranteed. A study of the changes in tourist numbers at 86 sites since the designation found that 51 had no, 13 a small, and 22 a large increase; already well-established tourism destinations did not register increases. If there is a large or only a small increase depends on several factors, like the level of awareness generated by media and active site marketing, distinctiveness, location and access, other attractions in the region, and inclusion in touring programmes. (cf. Van der Aa 2005; PricewaterhouseCoopers 2007)